Since its debut at the Lillehammer 1994 Winter Games, the Paralympic version of ice hockey has quickly become one of the largest attractions for spectators. It is fast-paced, highly physical and played by male and female athletes. At a league level in the UK the sport is played by both Disabled and Able Bodied players on the same team. At an international Paralympic level, it is played by players with a physical impairment in the lower part of the body.

It follows the rules of the International Ice Hockey Federation (IIHF) with modifications. Instead of skates, players use double-blade sledges that allow the puck to pass beneath. Players use two sticks, which have a spike-end for pushing and a blade-end for shooting.

Great Britain have competed at the Winter Paralympics on three occasions. They first competed at Lillehammer in 1994, then in Nagano in 1998, and Torino in 2006. They were 4th in Lillehammer and 7th in both Nagano and Torino.

In 2016, the sport was renamed and rebranded from IPC Ice Sledge Hockey to Para Ice Hockey.

COMPETITION DESCRIPTION
As in ice hockey, each team attempts to outscore its opponent by shooting the puck across the ice and into the opposing team’s goal while preventing the opposing team from scoring. Six players (including the goalkeeper) from each team are on the ice at one time.

Double-blade sledges that allow the puck to pass underneath replace skates, and the players use sticks with a spike-end and a blade-end. Therefore, with a quick flip of the wrist, the players are able to propel themselves using the spikes and then play the puck using the blade-end of the sticks. A player may use two sticks with blades in order to facilitate stick handling and ambidextrous shooting. 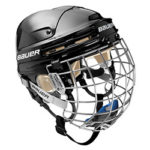 Protective gear: Because of the physical nature of the game, all players are required to wear a helmet with a full cage or mask as well as a protective collar or bib. Players are also encouraged to wear protective padding, including shoulder pads, shin guards, elbow pads and large padded gloves. In addition, the goalkeeper wears leg pads, body pads, a helmet with a visor and a catcher glove to protect the athlete from pucks flying up to 100 km/h. 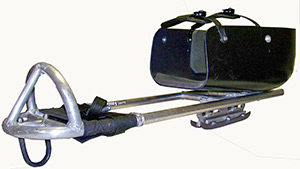 Sledge: Made of aluminium or steel, sledges are 0.6m to 1.2m in length with a curved front end and one of two different seating systems (known as Buckets). The sledge is set on two blades, which are usually made of tempered steel and are each 3 mm thick. The puck must be able to pass underneath the sledge. The height of the main frame is between 8.5cm to 9.5cm above the ice. Straps secure a player into the Bucket and straps across the player’s feet or ankles anchor the player in to the sledge.

Stick: In Para ice hockey, players use two sticks with a hooked wooden blade at one end (for puck handling and ambidextrous shooting) and a pick at the other end. Each stick has a maximum length of 1m and is made of wood, plastic or aluminium/titanium. The picks end of the stick must not damage the ice surface or inadvertently puncture or slash other players. 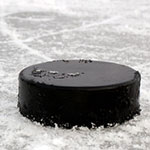 Puck: Made of vulcanized rubber, the puck is 2.54cm thick, with a diameter of 7.62cm and weighs 156 to 170 grams. Pucks are frozen before games, to help them travel across the ice surface. Top players can hit the puck at speeds of up to 100 km/h.

A direct descendant of ice hockey, Para Ice Hockey was invented at a rehabilitation centre in Stockholm, Sweden, during the early 1960’s by a group of Swedes who, despite their physical impairment, wanted to continue playing hockey. The men modified a metal frame sled, or sledge, with two regular-sized ice hockey skate blades that allowed the puck to pass underneath. Using round poles with bike handles for sticks, the men played without any goaltenders on a lake south of Stockholm.

The sport caught on and, by 1969, Stockholm had a five-team league that included players with a physically impairment and able-bodied players.

That same year, Stockholm hosted the first international Para Ice Hockey match between a local club team and one from Oslo, Norway.